How technology has shaped the victory of Barack Obama?

How technology has shaped the victory of Barack Obama? 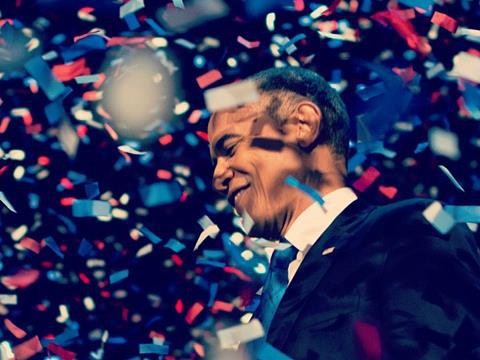 In the new campaign trend; the utilization of the most recent technology to nurture the outcomes of an election is nothing new. Politicians who have scripted many successful stories have usually made effective use of new technology such as social media, digital marketing, big data analysis and many other latest technologies over their opponents to win the heart of voters. The first candidate who has used this technology was Franklin D. Roosevelt to win over voters. Ronald Reagan have used satellite technology and rerecorded videos to raise fund across the country. In the presidential election of 2008, Barack Obama’s election team has utilized digital technology to lead in the race of politics. If you are also a successful future politician get the benefits of this technology then must take a look at the case study of Barack Obama whose internet campaign shaped the victory in political race.

It is important to say that there are politicians who have done exceptional work in implementing this strategy such as Donald Trump, Narendra Modi and Guillermo Lasso.

However, when this strategy was implemented by the US Senator's campaign command, it had a major impact on the immediate connection with the younger electorate, which was one of the most significant at the end of the electoral process.

In that sense, the inclusion of this sector of society, encouraged other sectors to take the initiative to contribute massively with this campaign, as they felt that Obama was with them, but in reality; what had been a great platform of contact by the campaign team, to have more effectiveness in the field work. 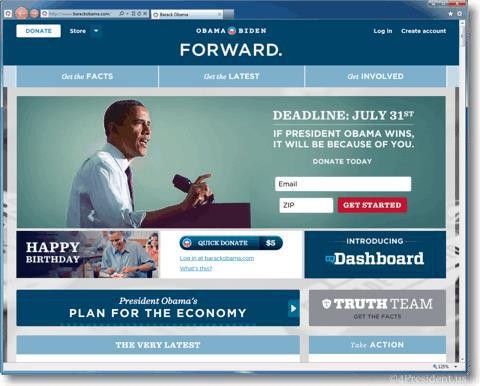 Its strategy was based on creating each one of these social networks, in order to optimize the use of each of them in its favor, adding the symbolic and communicational elements of the proposal and thus, have a benefit that differed from the rest of the contending candidates.

It is so important to be there without being, that social networks, which made a big difference with respect to his opponent Mitt Romney, which showed that a misuse of social networks, probably make him lose the election, drove the statistics of the last election of Obama.

On the other hand, they share images that speak for themselves, explaining each detail about the movement of each of the social networks and their influence on the electoral process of 2012. 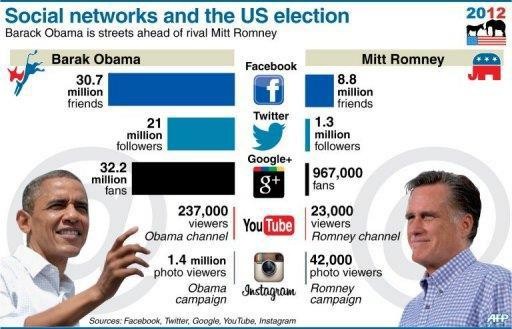 The president of the United States, Barack Obama is the politician who has demonstrated the importance of social networks in political campaigns and has stood out in this mass media for his interest in knowing the tastes and needs of the American population.

In 2008, Obama won the presidential election with 52.80% of the vote. The president launched a powerful strategy in his social networks that allowed him to get millions of followers by interacting via email with the users and informal of his activities and debates as a presidential candidate. For the 2012 election, where he was re-elected with 51.07% of the vote, Obama also achieved a great social outreach through barackobama.com, spreading his commitments to citizens and raising donations online. 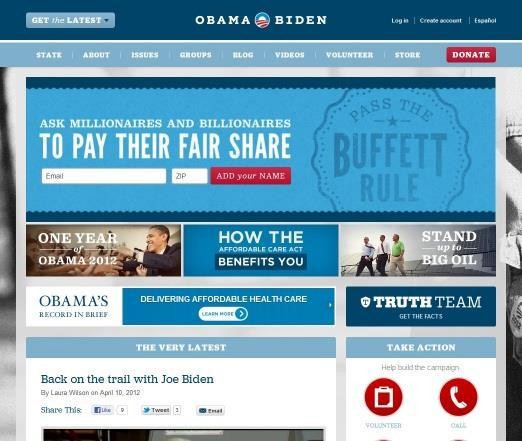 The most curious of all is that it all started by chance. In 2007, Obama announced the creation of a committee to value his options to the Presidency. That same day, a college student following the politician created a Facebook group titled "One Million Strong for Barack." In less than a month, they had already surpassed 270,000 members. In addition, all this done by an anonymous user, who did not even belong to the campaign of the then Senator.

Following this, their advisors designed a large-scale strategy based on having presence on virtually all major platforms. MySpace created profiles for each state, while LinkedIn raised questions to potential voters. Facebook and Twitter served as amplifiers of their message, while YouTube and Flickr were chosen to spread the multimedia content among their followers.

The advantage of all these portals? That having a presence there did not cost money, compared to traditional ads. To put it in perspective, and citing figures they share in this analysis of The New York Times, the ads that Obama uploaded the Internet were reproduced for more than 14.5 million hours, and always free. Doing the same thing on television would have cost them $ 47 million.

One thing they understood very well within the Obama campaign is that the social aspect could bring them many benefits, not just within the big social networks. With that in mind, they created their own social space, My.BarackObama.com, from which anyone could create a profile, engage in conversations with other followers and organize their own fundraising events. 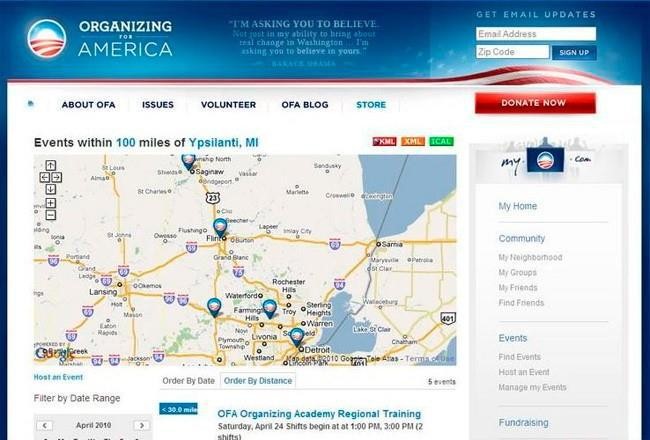 In total, they got more than 1.5 million users and more than 30 million dollars were raised through this page. Currently, this website is no longer available, but was one of the great differentiating elements in 2008 and after that many other campaigns have tried to replicate. It is no coincidence that the thinking mind in charge of organizing this service was Chris Hughes, one of Facebook's co-founders.

In 2008, and with Barack Obama, the Internet stopped being a place where simply to show big and striking banners for which it was necessary to pay sums almost millionaires. The network then became the point of organization and meeting among enthusiastic voters who were very different from each other but shared a common goal: to bring Barack Obama to the White House.

However, 2012 was a different year. In the four years between elections, social networks were completely bigger than ever. They stopped being something that only some used to become something that is part of the day to day of the society. Moreover, this is reflected in numbers: Barack Obama's 200,000 followers in 2008 turned into millions, just like the accounts of other politicians, celebrities, brands, among others. The big challenge for the Obama campaign became how to stand out among the already saturated social media. 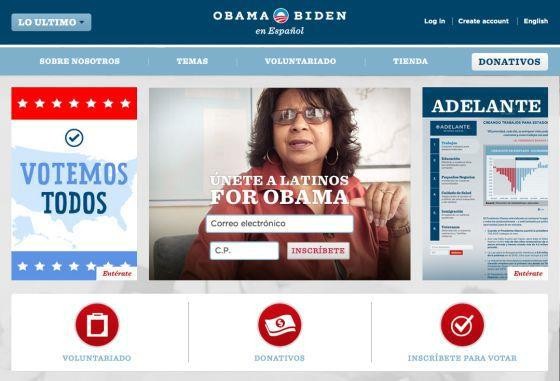 Without the surprise that was experienced in 2008 and with both candidates betting strongly on social media, everything seemed to indicate that the online presence (and its repercussion) would be more evenly matched. For example, both Obama and Romney bet on the paid advertising of Twitter and Facebook seeking to get new followers. Romney even went further and dared with his own version of MyBarackObama-oriented mobile devices.

Finally, in this particular case, it can be said that those of 2008 were the elections of social networks; in 2012, we can say that the big data elections were held. Obama's campaign team studied, for months, potential voters in the states they believed would play a key role in the victory (or defeat) of the then-President. In total, more than 54 employees formed the team: mathematicians, programmers and Internet experts. In Romney's campaign, they knew something was up to them, but they did not give it more importance believing that they too had all the data they needed.

First, the Obama team created a database with all the information gathered from volunteers, voters and other users in 2008. To complete the data as much as possible, Facebook was used. In Ohio, where Obama ended up winning 50.1 percent of the total vote, 29,000 undecided voters were identified, with a specific campaign targeting them.

Another example was lived in Florida, where the key group to win were the young women of 35 years. After consulting in this gigantic database, they found that most people liked the same TV series, so they invested in commercials to show during the broadcast. And guess at what web site many voters who did not have decided which candidate to choose? Yes, on Reddit.

The secret of all this is that Obama with the mobile application, in the company of the creation of all social networks with that feature 2.0 (multidirectional data exchange), helped to transform the way of doing politics worldwide. For all this, you must be present in all the spaces you can, but actively, in order that each of the actions that involve this strategy cover each of the aspects that define an election.

Contact us if you want to boost your online presence and communicate your political ideas, values, and principles to the public. With over 5 years experience in political website design and development, Social Benchers is the most prominent political website development agency creates visually appealing website that help to win the support of fellow-thinkers and let people be aware of your good work. We at social benchers boosting your social media profile by creating and designing user-engaged social media posts to reach out your potential voters.